We’ve All Got Homework to Do

What do I do with my realization that I have been oblivious to, ignorant of, and complicit in racism?

I’m a transgender man who transitioned back in college; as a visibly transgender man at that time, I had to constantly defend my claim to manhood. It felt like the only way I could do that was to conform to very expectation society placed on me as a man. By the end of college I was burnt-out on defending my identity and reaching for alternatives. After starting testosterone and having top surgery, I’m typically assumed to be a cisgender man by most people, making it my choice whether or not to share that I’m transgender.

The idea of not needing to fight the battle of my identity seemed especially appealing since, as a first-year teacher, there were plenty of other battles I needed to fight (for example: “Don’t sharpen your pencil while I’m giving instructions.”). So, in my first year teaching, I decided to stay in the closet.

After six years of teaching without talking about my own trans-ness, it became clear my middle schoolers were more trans-aware than I had realized. One transitioned—and they and their friends didn’t even know I was trans! The following year, at a Gender and Sexuality Alliance meeting, another asked me if I was trans because he had heard rumors that I was. I realized that, by not talking about my trans-ness outright, I was unintentionally sending the message that being transgender was something taboo, something not to discuss, and perhaps even something about which to be ashamed.

I realized I needed to come out to my students so the ones who were trans and gender non-conforming could have a visible role model of an adult who was like them. I also feared my cisgender students would grow up thinking they’d never met a trans person because no one “looked like” the trans women they saw in the media.

My story had major impacts on my school community. One of my students immediately texted his mom that his favorite teacher, me, was transgender—just like his older brother! His mom later told me I had become a powerful role model for him in seeing his brother’s trans-ness differently: now he had an image of what a trans man could be like as a successful adult. This made me realize how vital it was to be out and visible—not just for the trans students I might teach, but also for the family members and friends of transgender people.

Following that assembly, colleagues thanked me for sharing my story, expressing that they couldn’t imagine my bravery, getting up on stage and sharing something so personal. And my principal stopped me in the hallway that afternoon to thank me, and expressed, “Today, I learned that I’m cisgender. Thank you.”

Now, I had two minds about this moment with my principal. On the one hand, I was super proud of myself for educating my principal and my coworkers about these terms. And, as I shared my story, my audience was showing me their homework. I had successfully prompted this moment by sharing my own vulnerability and my expectation that they’d be vulnerable, too.

At the same time, I was angry. I was angry that it had to wait for me, a transgender person, to bring these issues to their attention. It angered me because my principal was in charge of a middle school in Chelsea, in New York City, and didn’t even know the terminology to describe gender in a more nuanced and complex way—a necessity of modern society! By not taking responsibility for her own education, my principal had made her gender education my responsibility.

Last fall, I attended a Social Justice Saturday event at Teachers College, and I went to a discussion with Tricia Ebarvia and Dr. Kim Parker from the #DisruptTexts Movement. They asked us to critically examine our media consumption. What marginalized voices were missing? I began to recognize something I’d overlooked: my schooling hadn’t included Black authors and bookstores had taught me “their” literature was different than mine and belonged in its own section.

But it was in this moment of recognizing that I hadn’t read influential black authors like Maya Angelou, James Baldwin, or Audre Lorde that I had a deeply uncomfortable realization: I’d never done anything to take responsibility for my own anti-racist education.

That thing my principal had done where she was just a well-wishing bystander but not actually doing anything to proactively promote trans liberation? That’s been me and my White identity.

That thing my principal had done where she was just a well-wishing bystander but not actually doing anything to proactively promote trans liberation? That’s been me and my White identity. There’s a parallel here of “Oh no! I didn’t do my homework!” But meanwhile, I’m mad at my principal for not having done her homework either.

Examining these two events made me recognize how easy it is to be a part of one oppressed group (in my
case, trans people) and, simultaneously, a member of an oppressing group (White people). Just because I might know much about the LGBTQ+ community’s experience of oppression, both from my own experiences and from reading and researching about queer history and talking with other LGBTQ+ people, including my community’s elders, doesn’t mean that I’m educated about all oppression. In fact, I have been oblivious to, ignorant of, and complicit in racism. I asked myself, “What do I do with this realization?” Happily, I’m a teacher, and I am unafraid of homework.

I found my own experiences as a trans person ignited the fire of my anti-racism work, shifting me from being a sympathetic bystander to an active accomplice willing to show up and do the work to examine my own whiteness. And even more importantly, as a teacher, I found myself willing to push my colleagues to analyze the systemic things that we can change as the adults with power in the building, instead of just encouraging our students to advocate for themselves. I also wanted to model how to be an anti-racist for all of my students, especially the White ones.

I found myself willing to push my colleagues to analyze the systemic things that we can change as the adults with power in the building, instead of just encouraging our students to advocate for themselves.

I made a commitment this year to read more Black authors, to consume more media produced by people of color, and to ensure that I use my summer to read up on the voices I’d overlooked and missed, so that I can be a better accomplice and a better ally. To be in solidarity with other anti-racists, I must be proactive, rather than wait for someone else to do the work. I must seek out the sources on my own and do my own homework, rather than rely on others to share their knowledge with me for free.

Representation matters: growing up, I didn’t know any trans men. Most of the visions of masculinity I had from society were toxic ones, so when I transitioned, I didn’t know how to enact my own masculinity without reenacting some of those problematic behaviors. It’s for this reason I decided to be out as queer and trans to act as a model for my LGBTQ+ students and their friends and family.

Kit Golan is a Math for America Master Teacher in his 10th year of teaching math at a public middle school in New York City. He is dedicated to crafting experiences for his students that invite them to mathematize their lives and see math as a tool for making sense of, explaining, and evaluating their lives. Kit also serves as a co-advisor for his school’s Gender and Sexuality Alliance and organized a contingent of his MfA fellowship teachers for the NYC Pride March in June 2019. He is constantly reflecting on his teaching practice on his blog teachdomore.wordpress.com and on Twitter (@MrKitMath). Reach Kit at MrKitMath@gmail.com. 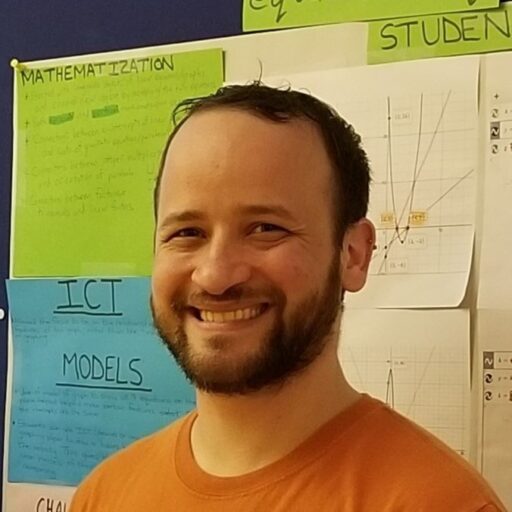